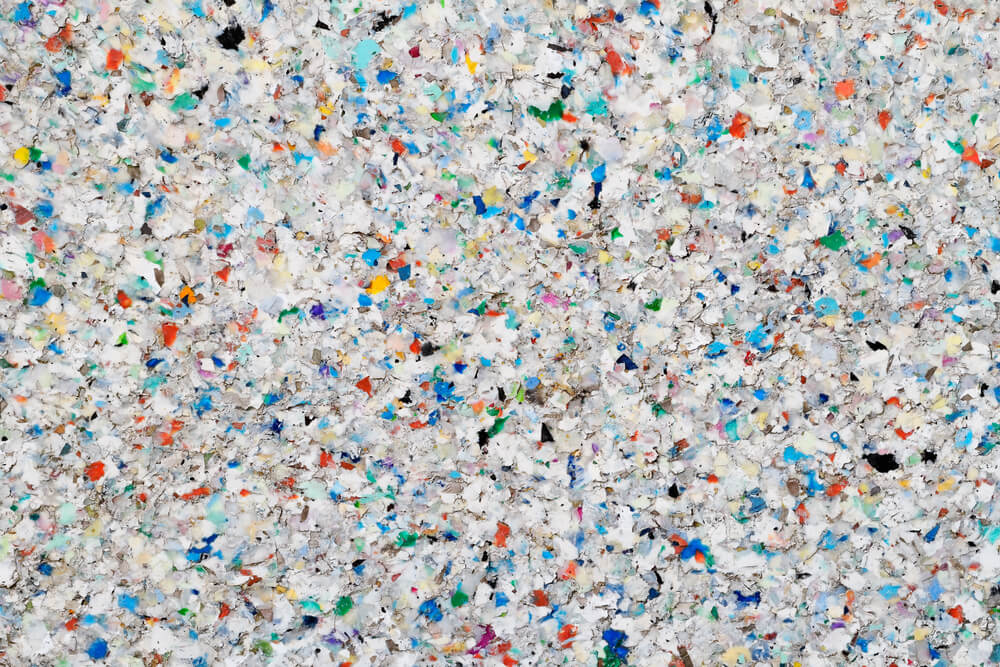 PE film is widely used in our everyday lives - you probably meet it every single day. Because polyethylene film is used for food packaging, grocery bags, medical packaging etc. as it is a product of great demand; however, it is non-degradable. There it is more important than ever that the used plastic film can be sent to recycling centres with a PE film recycling machine, and in that way be used for new plastic products.

Furthermore, burning PE film will cause pollution of the air, which is why recycling is by far the best choice of action. Our screw compactors can help you save energy in your PE film recycling process and gain the most from your resources.

The process of plastic film recycling is to shred the material into smaller pieces and to have it washed thoroughly and then dried. Traditionally, the drying process is carried out using hot air, centrifuging and agglomerating. However, a considerable amount of this energy demanding drying the PE film process can be replaced by pressing the water out of the wet PE film using a RUNI screw compactor SK370. Afterward the plastic can be pelletized in a PE film recycling machine.

Press Water Out of the Washed PE Film

The drying/compacting process increases the dry matter content of PE film from 60% to 90% at a low energy consumption of only 24 kW per 1.000 kg PE film. When the screw compactor is installed right after the centrifuge the process will be faster and increase the capacity on the whole drying line. The investment will quickly be recouped.

The RUNI Screw Compactor SK370 has been developed to operate on a fully automatic production line, 24 hours a day, 7 days a week of approx. 800 kg per hour.

A de-compactor unit can be installed to loosen the PE-film after it has been compacted. This can be useful if the PE film should be blown to next step.

Jasar Recycling installed a new Runi SK-370 Deliquifying Compactor for their East Palestine, OH location. “We are very happy with the RUNI SK370 PET Deliquifying system. Right now, we are running the machine in two shifts and the machine is keeping up with all of our plastic material. The nicest feature about the RUNI is that there is barely any maintenance on the system. The RUNI SK 370...

Separation Leads to Savings on Waste Charges Separation and dewatering in connection with destruction of Tetra Pak cartons turned the waste dry enough for recycling. NEN-PRODUKTER AS in Norway produces juice and smoothies sold in various forms of Tetra Pak cartons. “We have to take care of thousands of units every day due to normal and unforeseen production waste. A major part of this ...

Investment Paid Back Within 12 Months The SK120 meant great savings for small British industrial company. Even with RUNI's smallest screw compactor, waste is turned to value. At the same time, the company got rid of the mess of uncompacted EPS and dust. PREMIER PATTERNS AND CASTINGS LIMITED in the UK produces EPS patterns and moulds in all sizes, especially for the automotive, boat and aerosp...

Dewatered Waste Is Disposed at Lower Cost By compacting and dewatering reject, a paper recycling company avoid having to transport water for no useful purpose. SKJERN PAPIR A/S in Denmark produces 54,000 tons of liner and cardboard from recycled paper annually. In the initial sorting, the paper material is separated out from large, insoluble materials such as plastic, staples and other unwant...

Environmentally Friendly and Energy-Saving Drying of PE Film Folldal Gjenvinning saves between 100 and 150 kW / h per production line by pre-drying washed plastic film in a RUNI Screw Compactor. Folldal Gjenvinning, a division of Norfolier Norge AS, is one of Scandinavia’s largest recyclers of plastic film. With its latest production expansion, the division’s annual capacity ...

Dewatering Various Cans and Bottles with RUNI Screw Compactor Besides beer cans, Carlsberg Breweries in Denmark also produce Coca-Cola® in aluminum cans and PET-bottles. Carlsberg effective quality control daily sorts out substantial quantities, that needs to be destroyed. In more than 15 years Carlsberg has used a RUNI SK370 for emptying and compacting of PET-bottles. A few years ago the...

Compacting Airlaid Dust with Screw Compactor The Swedish company Rexcell produces tissue and airlaid. They are among the leaders within this business with a high level of technology in their production. The RUNI SK370 was installed under their extraction system to compact the dust before it goes into the waste container. The advantage with a RUNI screw compactor is the continuous operation wi...

Drying PE-Film with RUNI Screw Compactor One of the largest manufacturers of plastic granules from post-consumer waste in Europe, Systec Plastics Eisfeld GmbH in Germany, chose in 2017 to replace their existing installation of screw compactors with 6 new RUNI screw compactors type SK370, into their washing line for PE film, as part of the drying process of the crushed and washed plastic flakes...

Environment Friendly EPS Handling Turns Waste to Value Norlax earned a return on its investment in a RUNI SK370 and its housing within 2 years. On a good day, up to 1,000 boxes of salmon are fed into production at NORLAX A/S, Denmark. The huge quantity of EPS boxes used to fill 4 truckloads per day, which commuted constantly between the company’s premises and a waste handling company 30...

Compacting Fish Boxes of EPS (Airpop) with Screw Compactor In 2011 VEGA Salmon built new production facilities in Northern Germany very close to the German –Danish border for processing salmon. The production level is characterized by high flow which requires a high capacity compaction unit. The traditional way of solving high capacity demands is to have a stand alone pre-crusher and a ...

The RUNI Screw Compactor Has Been Great North Landing, LLC of Clifton, NJ installed a new RUNI SK370 EPS compactor for densifying fish boxes into recycleable logs. “The Runi compactor has been great. It has allowed us to keep our receiving docks clear and clean at all times. In the fish business…a machine like this is a must. Mike, if you ever have anyone who wants to see it fee...

Compacting Used EPS Fish Boxes with Screw Compactor Morpol in Poland, for many years the world’s largest processor of fresh salmon and today part of the Marine Harvest group. Every day Morpol receives thousands of EPS boxes with fresh salmon and chilling ice. The boxes are only being used once and Morpol therefore uses the RUNI SK370 for effective handling of the empty wet boxes contamin...

Solution for EPS-handling with Screw Compactor Cap Fraicheur, a French retail chain with a large sale of fish. The company was looking for a solution to compact their many used EPS fish boxes. Normally they have around 60 kg (130 lbs) per day. Most of the stores are located in city centers, and the available space is very limited. Besides the lack of storage, the odor from the used fish boxes...

Waste Management Creates Profit Large US furniture chain turns over USD 3 million through recycling of packaging In 2007, the US furniture chain Rooms To Go turned over USD 1.75 billion worth of furniture – products packaged using vast amounts of cardboard, wood, plastic and EPS. But already in 1991 the chain introduced a recycling programme that has transformed waste into a profitable ...

Storage Handling Would Be Difficult Without the RUNI SK120 RUNI SK120 has meant tremendous savings for a British retailer, in terms of both space and money. CHANTRY DIGITAL is a British retailer within consumer electronics and hard electrical appliances. The company covers four counties with seven outlets, and has a large nationwide commercial division. At its head office in Trowbridge, Chan...

Separating Paint Leftovers from Buckets By separating paint from the buckets and compact the packaging, the waste handling company saves money on both transport and disposal VEGLO MILJØSERVICE AS collects and processes hazardous waste from companies over a wide geographic area in central Norway, including cans and buckets of paint leftovers, around 300 tons p.a. which have to be emptie...

Optimises Recycling of EPS (Airpop) with Reason Approx. 30 tons annually or equivalent to more than 60 truckloads of EPS are collected today instead of going into the container with other combustible materials. The EPS has previously been a large part of the combustible fraction, but is now compacted on site and sold for recycling with reduced transport costs. The 30 tons of compacted EPS blo...

Optimize Biogas Production with Screw Compactor  Food waste is very suitable for anaerobic digestion plants. By separating as much of the organic liquid from the packaging the more feed stock is created for the plant and the weight of the packaging is reduced. The packaging normally goes to landfill. Haith Recycling searched the market before they decided for a RUNI screw compactor. They...

Vartdal Plast – takes the lead role in Norway From fish box producer to waste collector and LOOP ambassador Vartdal Plast is one of the biggest EPS converters in Norway and even in the Nordic region. The company was founded in 1962 and was, actually, the first company to produce fish boxes from EPS (Expandable Polystyrene). Keeping food fresh and houses warm is the very foundation of V...