Well Suited for Dust and Waste Products from Airlaid Production

Dan-Web in Aarhus produces machinery and equipment for the manufacture of airlaid products such as nappies, sanitary towels, bed sheets and meat pads – primarily as turn-key production systems. The company has its own pilot system for client demonstrations and for niche production of specialised airlaid products.

“We use a RUNI SK370 to compact start-up waste, edge trim and dust from the production line.

Without compacting airlaid waste only weighs about 40 kg/m3, but with the RUNI we achieve a density of several hundred kilos depending on the material,” says Jes Larsen from Dan-Web.

The RUNI Screw Compactor is dust-tight

Production dust is gathered in an air filter and is blown into an air trap before it leaves the ventilation system. Previously it was dumped directly into a standard waste container where it took up a lot of space and created dust problems.

“The RUNI has really been a great advance. It’s completely dust-tight so that the minor excess pressure from the ventilation system does not blow the dust out again. This means that the room is no longer full of dust and the system isn’t surrounded by dust. The compacting also means that we save money on transportation of the waste. A large waste container only had a capacity of about 500-600 kg, so sometimes we watered it down to make more room, but then we had to pay for the weight of the water at the waste disposal site,” says Jes Larsen.

Better than a baler

The RUNI Screw Compactor also makes waste easier to handle than a baler does.

“Other companies use a baler which makes bales measuring 1 x 1 x 1.5 metres with a thick steel band around them. Apart from the fact that the baler isn’t dust-tight, a lot of waste falls off during the handling of the bales. With RUNI the waste is more compact and it can either be picked up and placed directly into a waste container or compacted in endless sacks,” says Jes Larsen.

Dan-Web’s system can run 24 hours a day and even with 2-300 kg of waste an hour, the capacity limit for the RUNI SK370 is not reached.

“We are incredibly happy with it, and we now also include more of them as standard in the airlaid systems we sell. They are robust machines which are very reliable and practically maintenance-free,” says Jes Larsen. 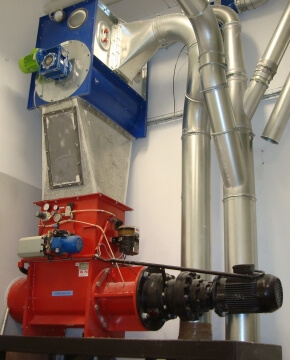